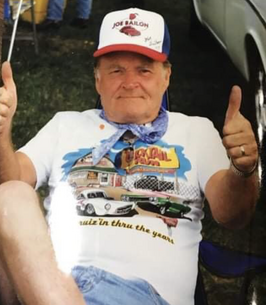 Jerry Robert Branham, 82, of Burlington, KY, passed away peacefully at his home on Thursday, February 17, 2022. Born in Gulston, KY, on April 22, 1939, he was the son of the late George and Francis Branham. Jerry was as an Engineer with the CSX Railroad, a company he had worked with since he was 16, for 38 years before retiring in 1998. He was a lover and owner of classic cars and enjoyed going to car shows. Jerry also enjoyed working on his iPad, watching racing and car programs on TV and reading to his grandchildren. His wife and family were his life and he loved spending time with them and his dog, Abby. In addition to his parents, Jerry was preceded in death by his sons: Donald Eversole and Jerry Branham and son-in-law: Glen Gillespie. Jerry is survived by his beloved wife of 32 years: Helen Branham; daughters: Kathy (Paul) Howard, Debbie (Greg) Ponzer, Cyndi Branham, Robin (Joe) Sheriff, Dorie Eversole and Claudia Gillespie; brothers: Sonny Branham and Gary Branham; sister: Debbie Courtney; 14 grandchildren and 26 great-grandchildren. A Visitation will be held on Tuesday, March 1, 2022, from 12:00 P.M. (Noon) until the Funeral Service at 2:00 P.M. at Serenity Funeral Care, 40 West 6th Street, Covington, KY 41011. Online condolences may be expressed on Facebook or at SerenityFuneralCare.com